About the Check Reports Dashboards

When Response Management (RM) is installed in an org, a dashboard called FCI [ Company Name] Check Reports is included in the installation, along with nine underlying reports.

This set of reports and dashboards is required to monitor the ongoing health of an organization's Response Management installation, and to surface related data integrity issues, or certain process issues that are occurring. The dashboard includes serious indicators of problems as well as less critical but still useful informational reports.

This dashboard should be scheduled for delivery to people (system administrator and/or another designated operations user) who will be responsible for reviewing the reports daily or weekly.  The deployment team will schedule the dashboard to be updated and delivered via email, so please verify that it’s kept current and being sent to the correct people. Corrective action is easier before large amounts of data are affected.

Column 1: Data Exceptions - Should all be 0

After opening and refreshing the Check Reports Dashboard, there is a series of reports in the left column with the header "Data Exceptions - Should all be 0"

These reports should all have 0 results.  If any of these reports do show a number other than zero, this should be investigated as soon as possible before the issue interferes with the accuracy of the Full Circle Method reporting tools and business process.

This report will capture any campaign member responses that were in an active status when the lead or contact status was changed to a value not configured in the RM application status mapping page. These responses will no longer be considered active or sync with the lead or contact.

This is a three part solution:

Finding the root cause:

There are 3 possible causes of this:

In most cases the configuration will need to be updated. (The exception is if it was an importing error - in that case just fix the campaign member data). 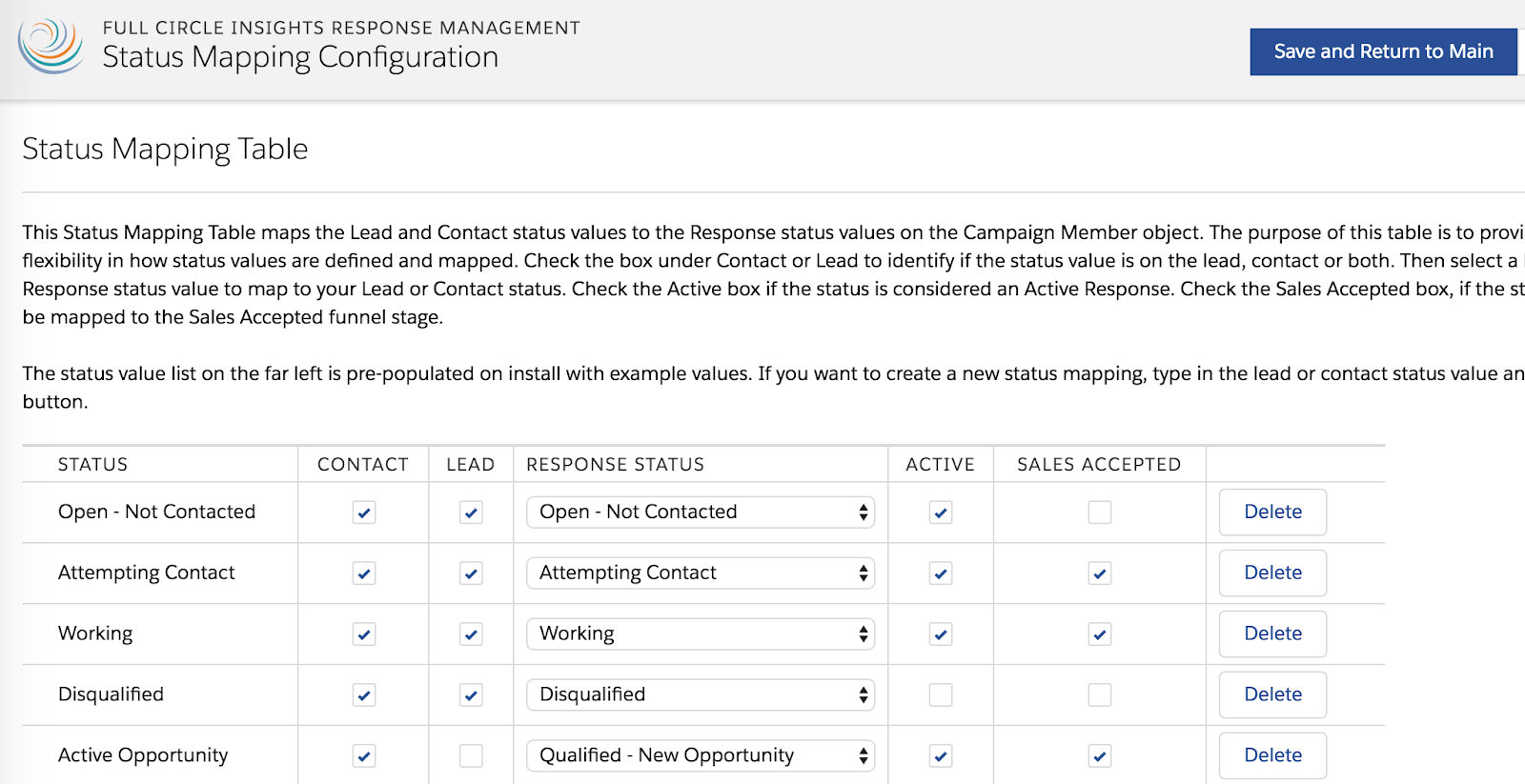 A Deferred Update Item (DUI) record gets created when an update Response Management was trying to make to a lead, contact, or campaign member was blocked by another process. These records are being created in the background every day and then deleted once they get automatically reprocessed. There should be zero records in this dashboard component.

If there are records listed here, it means that either the update hasn’t yet been re-attempted, or has failed to happen even after retrying, or that the update did happen but the DUI record did not get automatically deleted.

There are two things to pay attention to here. First there may be errors that are causing many records to fail to update. The error messages (see example below) should be reviewed and whatever is causing the error should be addressed. 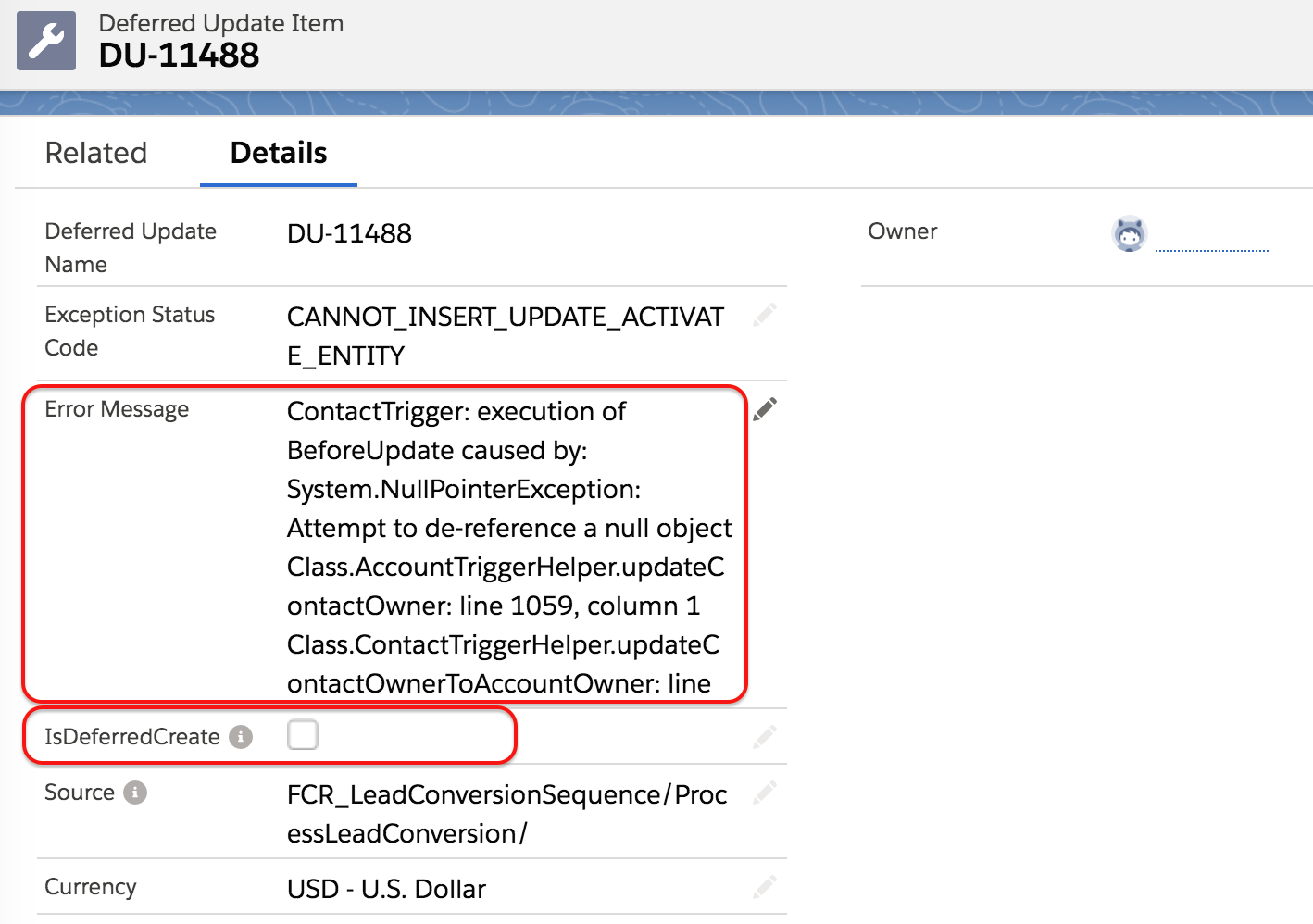 Second, the update should be retried (if it has not successfully been completed) and the DUI record deleted.

To understand what object and fields RM is trying to change, see the Object Name field. This displays the type of object RM tried to update (Lead, Contact, or Campaign Member). If it’s a lead or contact, a link to that lead or contact will be provided in the “Source” section of the page. A link to the campaign member, if one is involved, is available in the View Response field

Check the “Fields” section to see what fields are being updated. 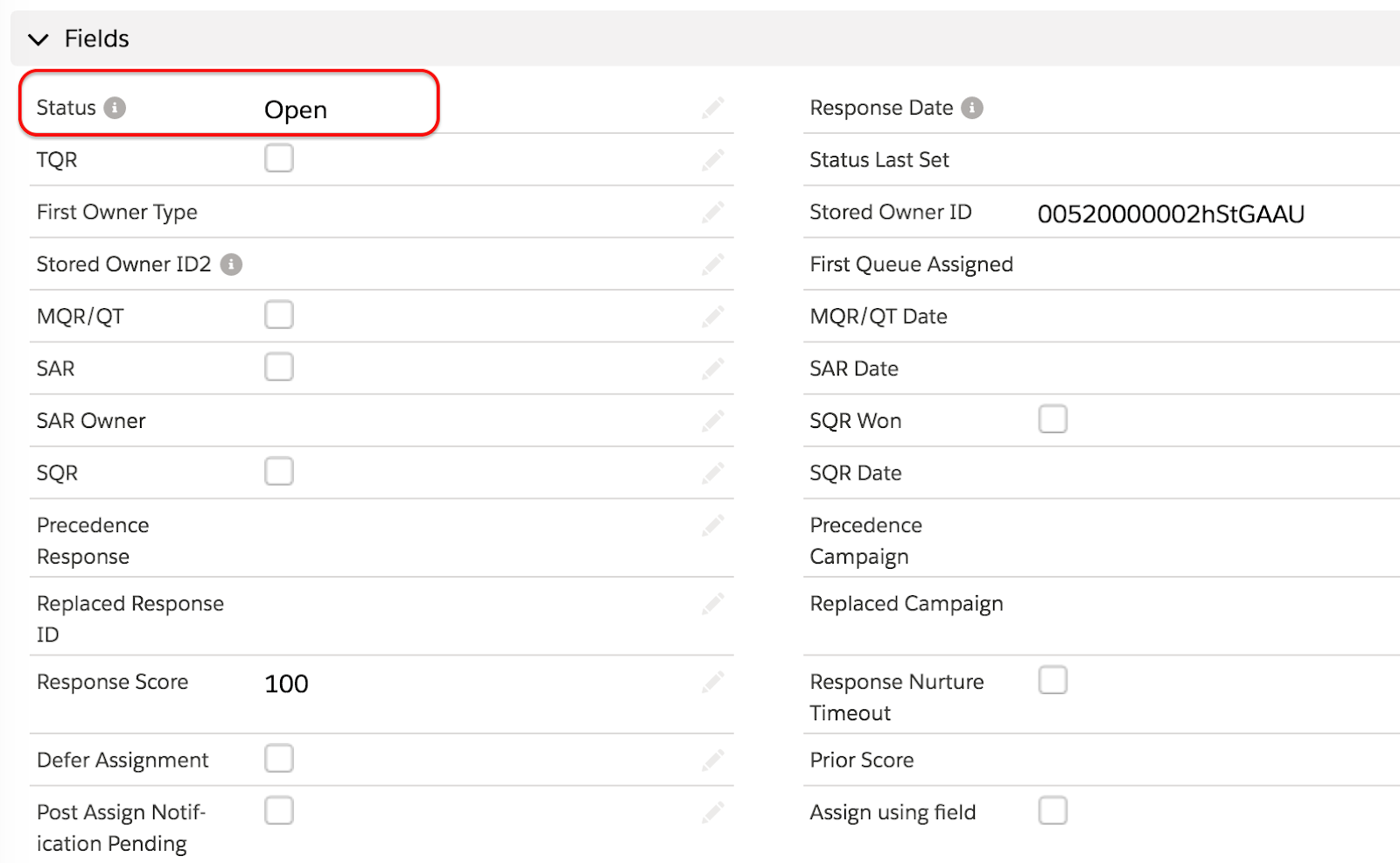 Check the responses to understand why they were not processed. Some questions to ask:

Once the cause is addressed, update the campaign members:

For campaign members with a non responded member status, set the Response Status to “Not a Response”.

For campaign members with a responded member status follow these steps:

Opportunity does not reference the Campaign Member Response ID:

Open the campaign member record and click on the link in the field titled Opportunity Name, notice that the Opportunity Response ID field on the opportunity is blank.

Please see this document for detailed instructions on how to use the Admin Response Control field to update the linkage between opportunities and responses.

A stalled async request record is created by RM when the application is trying to make updates to records asynchronously (meaning with a delay of seconds or minutes), and it cannot complete the updates.

Read the error text to determine what is preventing the async requests from completing. Please submit a support ticket to the FCI customer success team if there is a large volume of these records and/or a cause cannot be found.

Some possible causes of this type of failure are:

After the problem has been solved (validation rule updated, custom code fixed, etc.), the Stalled Async Requests can be rerun by following these steps: 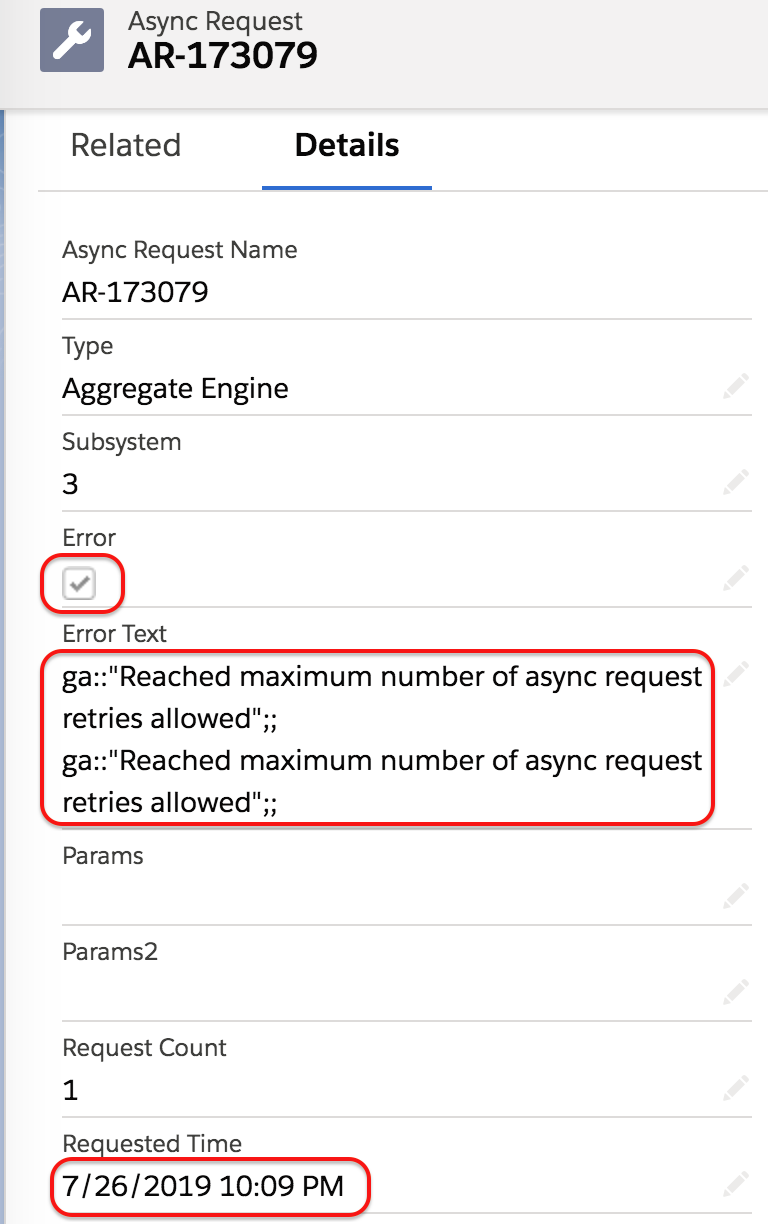 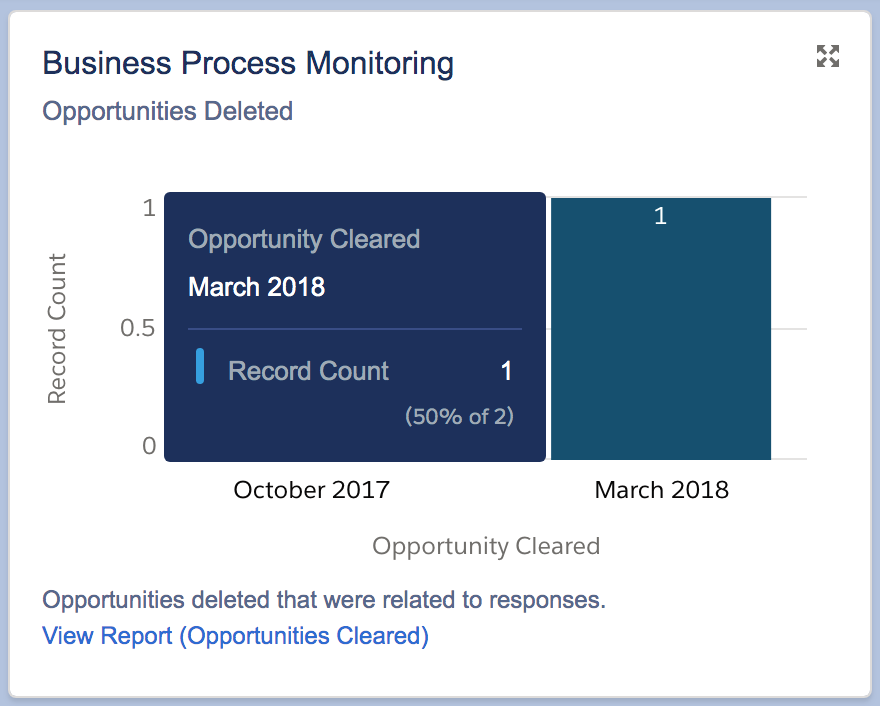 This report displays any responses that were associated with opportunities that were deleted.

It is considered a best practice to close lost or expired opportunities with a valid Lost Reason so that an organization can have visibility into why opportunities are not being won. This component highlights deleted opportunities that were once associated with a funnel, and also be aware of any funnels where progress came to a dead end rather than resolved in closed/won or closed/lost. This also may affect funnel velocity reporting, especially if funnel stages are set based on opportunity stage.

To avoid these orphaned responses the recommendation is: 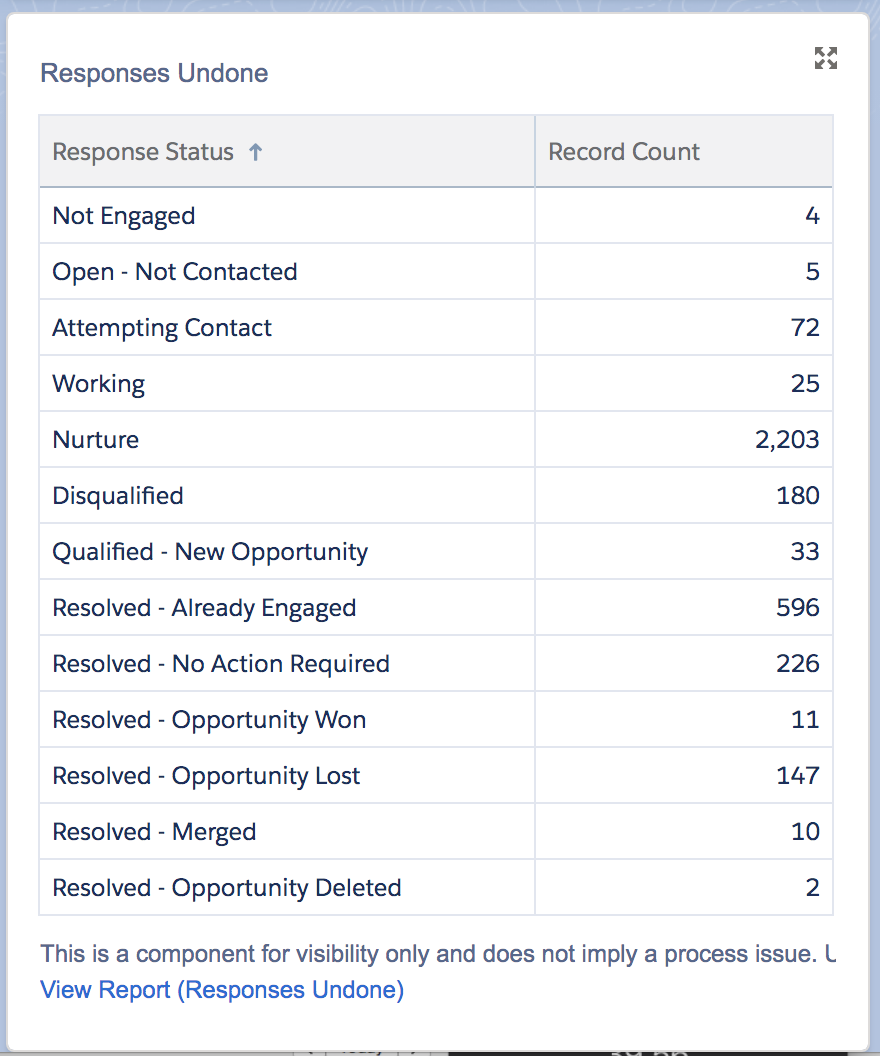 This report displays campaign members that were created with a “Responded” value then changed to a “Non-Responded” value.  For example, the member status could have changed from “Responded” to “Sent”. This report is intended to offer visibility about potential problems with the marketing automation process. For example, if the marketing automation system or an import attempts to set a member status that is not configured on the Campaign, the default (often ‘Sent’ ) will be used instead - so this type of error may also point out Campaign configuration errors.

The application will continue to track the funnel and attribute influence on the campaign member as long as the Response Date field is populated, however there is an impact on the ability to generate repeat responses. Response Management is usually configured to generate a ‘repeat response’ when an activity is repeated by a person within a given timespan, for example if a customer fills out the same form twice this can result in two campaign member responses for that campaign. If the campaign member was reverted to a non response this will not occur.

Recommendations for solving this issue:

In most cases it’s best to keep campaign members from reverting from a responded value.

This report shows opportunities that are still open, but they have a Close Date that is in the past, by at least one day.  These opportunities can impact campaign attribution reporting metrics and funnel velocities.

If there are a lot of these opportunities in an org using the campaign attribution (multi-touch) influence reports - consider using the advanced setting: 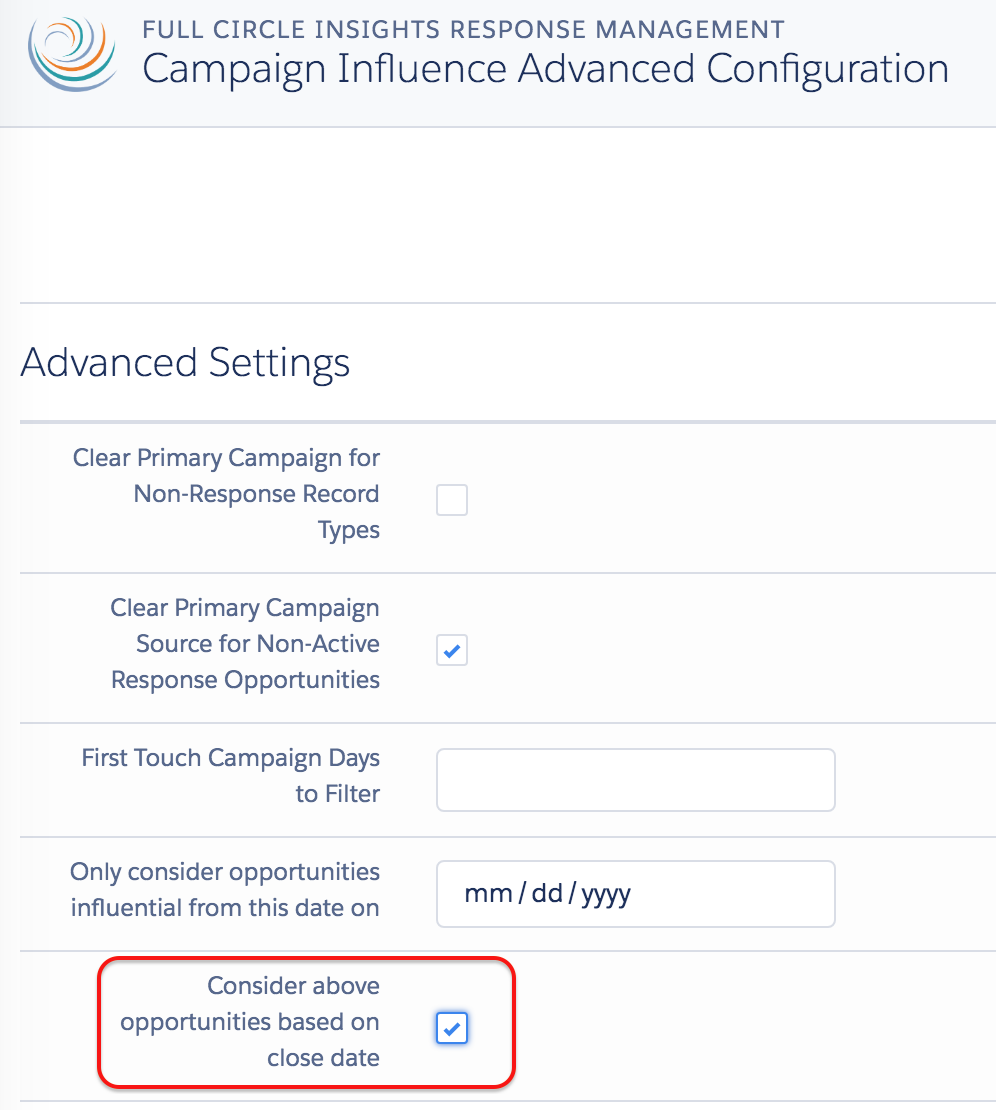 To avoid this issue from continuing, the recommendation is to: 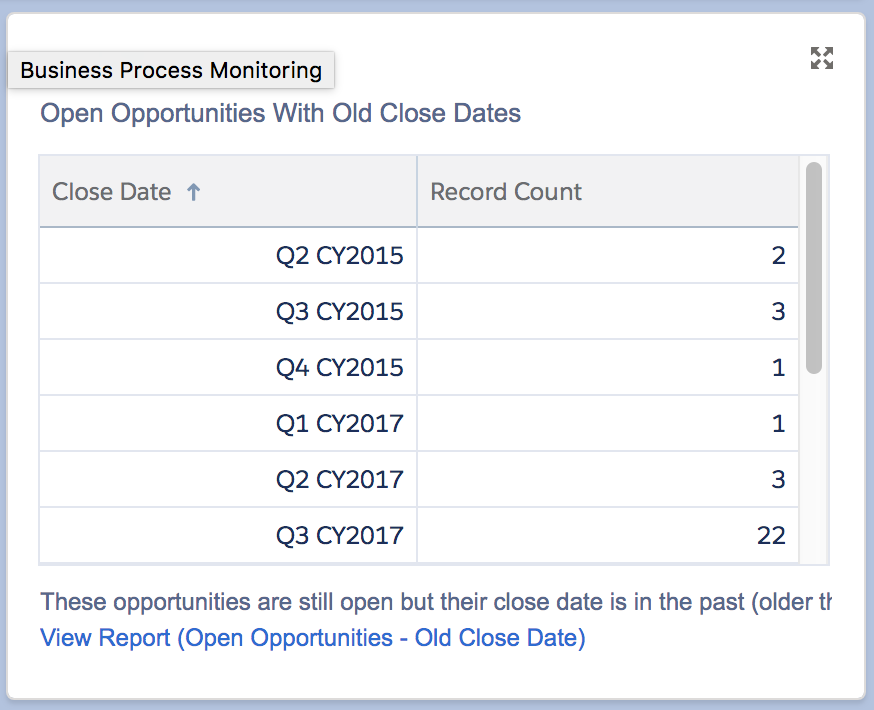 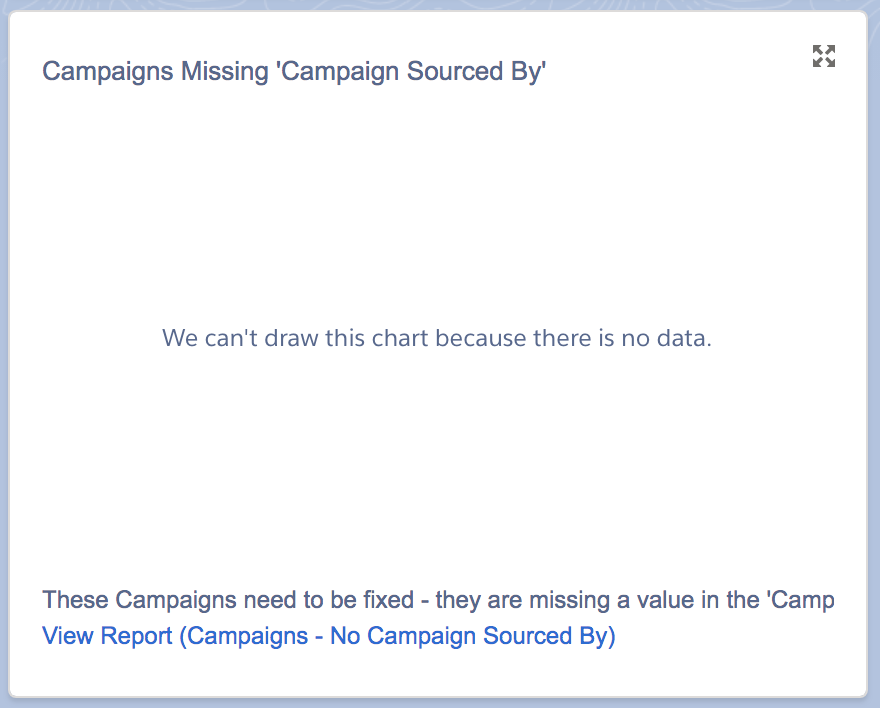 This component lists all campaigns where the Campaign Sourced By field was left blank. It’s important to make sure this field is filled out for every campaign so that Response Management reporting can accurately reflect all responses in the correct funnel, and so that funnels are set correctly. In many cases, the funnel stages are set differently per the Campaign Sourced By value. For example the sales sourced funnel may not include an MQL or Inquiry funnel Stage, where the marketing sourced funnel does.

Note that when the Campaign Sourced By field is blank, funnel metrics for these campaign members is set based on the default funnel configuration.

To prevent this from interfering with data integrity the recommendations are:

For any questions not answered by this document please log a case on the Full Circle Community.